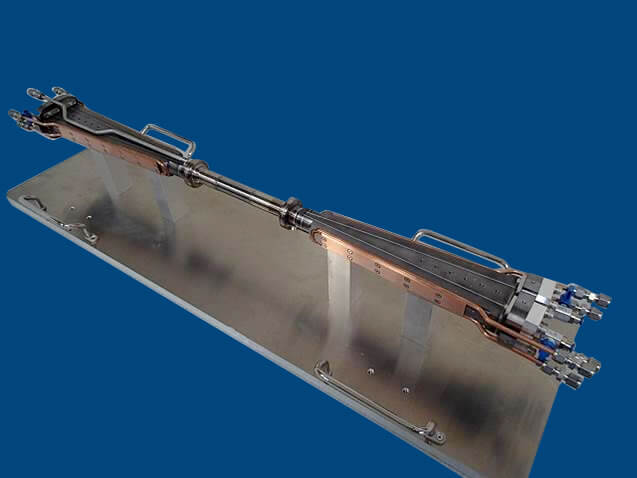 The beam pipe is a vacuum chamber with a complicated structure that is used as part of the SuperKEKB, a gigantic accelerator leading the physics experiments in elementary particles in Japan.

The SuperKEKB is a colliding-beam accelerator and the beam pipe manufactured by MTC is installed at the most important part of it, (add: the interaction region (IR)) where electrons and positrons collide frontally.

The center of the beam pipe is made of thin-walled beryllium, allowing the new particles to permeate unobstructed, because of its low atomic number. It has a double structure for cooling, with the cooling medium flowing between the walls.

On both sides of the pipe, Tantalum that has a high atomic number is used to shield against particles (noise) incoming from other parts of the SuperKEKB to prevent them from entering the detector.

Electrons and positrons intersect at a low angle and to allow them to cross the interaction region at that vector, the pipe splits in two on both ends.

The product has a total length of 1000 mm with the collision point being 200 mm long with a diameter of 20mm. It is made of a double-layered beryllium pipe of less than 1 mm thickness. For the production of the pipe we combined various techniques and materials, e.g. the brazing of ultra-thin beryllium and titan, the processing of tantalum, the HIP bonding of titan and tantalum.

Any request about products, and ask for quotation can be made here. Other questions and requests about the company can also be made here.